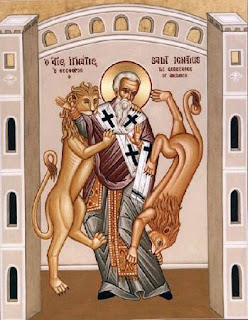 Persecution was nothing new to the early Christian Church. In the opening years of the second century Anno Domini, the pastor of the important church at Antioch in the Roman province of Syria (situated in modern day Turkey), was arrested and sent to Rome for trial and execution. Such things we read of but I can scarce imagine. The journey overland to Rome was a long one. What thoughts or despairs would rack the mind of a man on his way to death? Would circumstance cause bitterness and madness at God’s perceived abandonment? I don’t know how I would react. Sadly, I do know that I grow weary with God at the slightest upset in this privileged life of mine.

With their shepherd gone who would feed the local church the word of God? How could God abandon his servant to the Romans? The pastor in question was a man called Ignatius, a man filled with the Spirit and driven by a love for Christ to bear testimony of God. He once said, life begins and ends with two qualities. Faith is the beginning and love is the end; and the union of the two together is God. On route to his certain death he took the time to write letters to the churches of the regions he was taken through. Here are some excerpts,
In the midst of these iniquities, I am learning. Yet I am not justified on this account...let the tortures of the devil all assail me, if I do but gain Christ...I am the food of God, and am ground by the teeth of wild beasts that I may be found pure bread.

He also wrote to the Christians in Rome that awaited his arrival, he urged them not to try and save him from the capital punishment that awaited him. To these co-workers of Christ in Rome he penned the following lines.

Christianity lies in achieving greatness in the face of the world’s hatred...He who died for us is all that I seek; He who rose again for us is my whole desire...earthly longings have been crucified; in me there is left no spark of desire for mundane things, but only a murmur of living water that whispers within me, ‘come to the Father’...Remember the church of Syria in your prayers, it has God for its pastor now, in place of myself, and Jesus Christ alone will have oversight of it...As I write this, it is the twenty fourth of August. Farewell now until the end, and wait with patience for Jesus Christ.

Ignatius’ body was torn to pieces by wild beasts to the amusement of the Romans one hundred and eight years from the incarnation of his Lord.
Posted by Anglandicus at 3:48 PM