The Book of Armagh - A Bible from the Early Irish Church 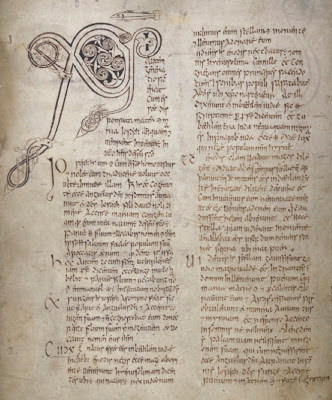 The Book of Armagh is the earliest surviving complete NT manuscript produced in Ireland. It dates from the beginning of the 9th century, offering a fascinating glimpse into the early Irish Church. The Manuscript contains the entire NT (plus the pseudepigraphical Epistle to the Laodiceans), the Confession of St. Patrick, several early histories (Vitae) concerning St. Patrick, the Life of St. Martin, and Jerome’s letter to Pope Damasus (concerning his revision of the Vetus Latina). Like modern study Bibles, the Book of Armagh has introductions to the Biblical books, and a cross reference system (the Eusebian Canons).

As with all Irish Bibles (prior to the 17th century) it is written in Latin. The Biblical text itself reflects predominately the Vulgate, with Vetus Latina influences. This conflated textual basis is typical in Irish manuscripts. In terms of textual criticism the textual variants are largely insignificant. It contains the Pericope Adulterae (John 7:53-8:11) and omits the Comma Johanneum (1 John 5:7). The Lord’s Prayer in Matthew 6:13 does not contain the addition, for yours is the kingdom and the power and the glory forever, amen. The account of the angel stirring the water in John 5:4 is absent. Colossians 1:14 omits the clause through his blood. 1 Timothy 3:16 reads he who was manifest. It includes the longer ending to Mark.

The main scribe of this important manuscript was a scholar named Ferdomnach (d. AD 845), who was described in the Annals of Ulster as Sapiens et scriba optimus, i.e. a wise and excellent scribe. His penmanship is careful yet beautiful. At the foot of folio 79r he proudly wrote in the margin that he had completed the two preceding columns dipping his quill only three times. Several other scribes helped with the writing, with some adding Irish commentary in the margins to help explain the Latin text. For example in Acts the Latin phrase, contra stimulum, is explained in the margin with an old Irish gloss, frisin tomaltid, i.e. against the goads.

Over time the book itself was venerated as supposedly written by St. Patrick himself. An official keeper (in old Irish Maor) was entrusted with safekeeping the manuscript on behalf of the church of Armagh. This guardianship was passed down on a hereditary basis. The MacMaor clan (literally, son of the Keeper) guarded this manuscript until the 17th century when they pawned it for £5! It then passed into private ownership and eventually the possession of Trinity College Dublin, where it can be seen today. 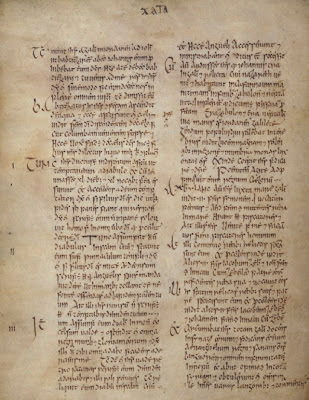 What this manuscript contains is the early influences on Christianity in Ireland. The British certainly influenced Ireland; men like Patrick (and countless others) introduced the Christian faith to the pagan Irish. Roman culture and theology also played a major role in shaping early Christian Ireland. Men like St. Jerome were seen as authoritative voices in matters of theological dispute. The language of Rome, Latin, permeates the manuscript, from Patrick’s Confession to the NT text itself, and it was the language of the early Irish Church. By no means least, we must remember the profound influence the Bible itself had on Irish Christianity. The Irish studied it, memorized it, copied it, and illuminated it. It became the focal point of Irish artistic and theological expression.

However, as time passed some of these influences became stumbling blocks. Men like Patrick, who called the Irish to faith in Christ, became the object of veneration and worship. Men like Muirchú (fl. 697) wrote that Patrick was given the right to save the Irish on the day of judgement, the book of Armagh preserves his Vita Patricii. Prayer to Patrick and the saints became the norm. The Latin Bible gradually became irrelevant and incomprehensible to the Irish as Latin learning waned. No attempt was made to translate the Bible into Irish. The Bible became venerated as an object while its message became suffused with extra-Biblical tradition. Today the average Irishman probably knows less about the Bible than in the early medieval period. We need once more to open the Scriptures to the Irish. Patrick is sometimes disparagingly called by scholars, homo unius libri (a man of one book), because his writings were packed with extensive Biblical quotations and little else. That’s the kind of teaching we need, that is the correct use of the Bible. We must like Philip, open our mouths, and beginning with this Scripture tell the good news about Jesus (cf. Acts 8.35).
Posted by Anglandicus at 10:34 AM