In Te Christe - A hymn from the Irish Church 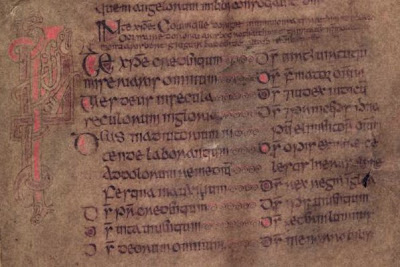 Congregational singing was an important part in the spiritual life of the early Irish Church, as it was in Christendom as a whole. The Psalter was the hymn book par excellence. The Psalter was the most studied book in the monastery and most would have memorized it, sometimes singing all 150 psalms in a day. The typical format of worship in the early years of the Christian church in Ireland would have been simple yet powerful chanting. There is a story of a young Kerryman from the 6th century, Mochuda, who was herding swine in the hills when he heard a group of monks chanting the psalms. Amazed at the beauty of the melody he stayed out all night just to listen to the chanting of the vespers. Needless to say the pigs did a runner. Adomnán (d. 704), records that when Columba and his fellow monks entered the wilds of northern Scotland to evangelise the Picts, they stood outside a Pictish fort (because the king refused to see them), and chanted Psalm 45, (I address my verses to the king...). Apparently the Picts were afraid of the voices which they compared to roaring thunder. What that says about the Irish missionaries singing abilities is open to interpretation.

A more refined polyphonic chanting developed in the Irish church over time. Columbanus (d. 615) allegedly wrote some rules for singing in his monastery. It included singing antiphonally, with one monk intoning the opening line and the others responding. In 1228 Stephen of Lexington was sent by the abbot of Clairvaux in France to check Cistercian houses in Ireland. Letters from his visit survive and give the impression that he wasn’t overly impressed with the exuberant worship services. He passed a new directive that no one was to sing with duplicated tones under pain of flogging and a diet of bread and water! So much for polyphonic chanting!

Besides the Psalms, the Irish also wrote many personal hymns of praise in both Irish and Latin. Collections of these hymns are found in various manuscripts in Ireland and also the continent. A large collection of Irish hymns were discovered in Vienna at the famous Irish monastery Schottenstift. They date from the twelfth century and many include musical notation.

The famous 11th century Irish manuscript Liber Hymnorum (the Book of Hymns) contains hundreds of hymns from the early Irish Church. One hymn is entitled In Te Christe. It was supposedly written by Columba (d. 597), but it probably dates later than him. Here is an excerpt.

In thee O Christ, have mercy upon all believers
You are God, forever and ever in glory
God maker of all, the judge of the judges
God is the prince over princes, of all the elements
The God of eternal light, the God indescribable

God highly beloved, God incomparable
Generous God slow to anger, teacher of the teachable
The God who made all things, everything, both new and old

Christ, the breastplate of soldiers, the creator of all
Christ the salvation of the living, and the life of the dying
He has crowned our army with a crowd of martyrs
Christ has redeemed us, Christ has suffered for us
Christ ascended to the cross, Christ has saved the world
Posted by Anglandicus at 7:49 AM