The Carmen Navale - The Boat Song 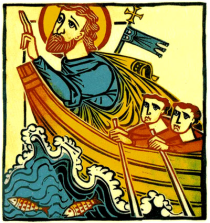 Columbanus was early Ireland’s greatest missionary. Together with a motley crew of pilgrims for Christ he traversed across modern day France, Germany, Switzerland and ended up in northern Italy where he spent the remaining years of his life correcting the heresies of the Arians of northern Italy with the cauterizing knife of the Scriptures. For Columbanus, life was a journey, a pilgrimage, a voyage of discovery and sometimes of hardship. Its final destination was union with Christ.

French historian Georges Goyau noted, the Celtic missionary genius had produced individuals of outstanding energy, it had given the world magnificent apostolic personalities. Of these Columbanus was probably the greatest. According to Léon Cathlin, Columbanus was together with Charlemagne the greatest figure of France in the early Middle Ages. Henri Petiot described him as a sort of prophet of Israel, brought back to live in the sixth century, as blunt in his speech as Isaiah or Jeremiah. And not to be outdone, Robert Schuman (former French Prime Minister and main architect of what would become the EU) lauded Columbanus as the patron saint of those who seek to construct a united Europe!

Journeying up the Rhine in 610, Columbanus and his disciples supposedly chanted his famous ‘boat song’. One can almost hear the Irish monks dig their oars into the Rhine’s formidable current as they struggle upstream. The poem compares the surging storm waters with the trials and struggles of the Christian life. Columbanus sees the tempests and storms of life overcome by the one who is in Christ. He frequently used the analogy of storms at sea as a picture for hardship and trials. The Carmen Navale is one of my favorite poems attributed to Columbanus. The translation is taken from Tomás Ó Fiaich's work 'Columbanus in his own words'.

Lo, little bark on twin-horned Rhine, From forest hewn to skim the brine, Heave, lads, and the echoes ring!

The tempests howl, the storms dismay, But manly strength can win the day, Heave, lads, and let the echoes ring!

For clouds and squalls will soon pass on, And victory lie with work well done, Heave, lads, and let the echoes ring!

Hold fast! Survive! And all is well, God sent you worse, he’ll calm this swell, Heave, lads, and let the echoes ring!

So Satan acts to tire the brain, And by temptation souls are slain, Think, lads, of Christ and echo Him!

Stand firm in mind ‘gainst Satan’s guile, Protect yourselves with virtues foil, Think, lads, of Christ and echo Him!

Strong faith and zeal will victory gain, The old foe breaks his lance in vain, Think, lads, of Christ and echo Him!

The King of virtues vowed a prize, For him who wins, for him who tries, Think, lads, of Christ and echo Him!