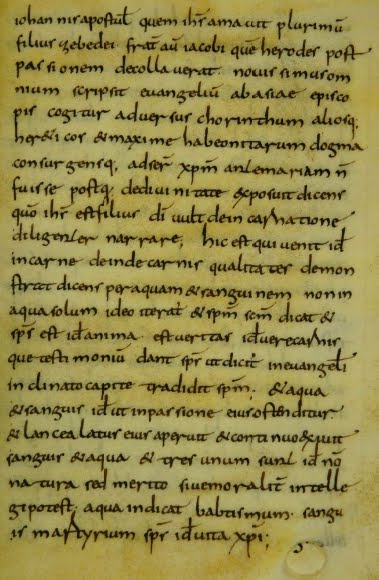 Several Early Church Fathers commented on various verses from the Catholic Epistles but none ventured to write a verse by verse commentary on them. That was until the seventh century when a remarkable Biblical commentary was written in Ireland.

This Latin commentary on the Catholic Epistles was composed by an anonymous Irish scholar (c. AD 680) and is now preserved in a single ninth century codex in Karlsruhe Germany (Karlsruhe, Badische Landesbibliothek Cod. Aug. 233). This single remaining codex, of a once popular commentary, can tell us several important things about the early Irish church.

Prior to the discovery of codex 233 the earliest Latin commentary on the Catholic Epsitles was thought to be Bede’s Expositio in epistolas catholicas which was written in the eighth century. However, the Irish commentary predates Bede's work and as McNally has shown Bede availed of the earlier Irish work. This shows us the benefit that the English church drew from availing of Irish exegetical sources. Bede had great praise for Irish scholarship. Furthermore, the ninth century Karlsruhe manuscript was not copied by an Irish scribe (the paleographical evidence points to a German scribe), this shows us that European Christians were copying and studying theological works produced by the Irish.

Our anonymous Irish theologian (Scotti Anonymi) cites from several well-known early church fathers in his commentary (e.g. Jerome, Augustine etc.) as well as several Irish theologians not known outside of Ireland (Manchianus, Bercannus, Bannbannus, Lodcen, and Brecannus). This shows our writer as remarkably confident in his own native theological tradition, citing homegrown talent along side the traditional Latin heavy weights.

Most of the Irish theologians that he cites come from the southern part of Ireland, particularly the areas of the Dési, viz. Lismore. He cites Manchianus as doctor noster (our teacher), which has led McNally to postulate that our writer may have been the brilliant Irish theologian known as the Augustinus Hibernicus, or the Irish Augustine. Augustinus' most famous work, De mirabilibus sacrae scripturae (On the miraculous things in sacred scripture), was widely read in Europe and was so good that it was assumed to be the work of Augustine of Hippo (it was printed by Migne in the 19th century as part of Augustine of Hippo’s works). The Irish Augustine in his work on miracles refers in passing to Manchianus as his pater. If this commentary on the Catholic Epistles really is the work of the Irish Augustine remains to be seen, what we can at least say, is that both the commentary and De mirabilibus emerged from the same scholarly circles, viz. the south of Ireland in the seventh century.
Looking at the commentary itself we can say that the Biblical text cited is typically Irish; predominantly Vulgate with numerous Vetus Latina interpolations. I was most interested to see if the comma Johanneum was present in his text, it wasn’t. It doesn’t appear in the Book of Armagh either. His commentary for 1 John 5.6-8 is an excellent example of early Irish exegesis and is worth taking a look at.

The water and blood of verse 6 are interpreted as referring to the passion of Christ, John 19:34 is cited as support. The three that testify in verse 7 are identified in verse 8 as Aqua, Sanguis [et] Spiritus, i.e. water, blood and Spirit. This clearly shows us that he was using an ESV rather than a KJV! He then offers two interpretations for these three witnesses, a moral interpretation and an anagogical interpretation. This multi layered hermeneutic was very common in Irish exegesis as it was in the western church as a whole.

How do these Three bear witnesses and to what do they bear witness? Our anonymous Irishman explains that the Father bears witness to the Son when He speaks at Christ’s baptism (Matt 3:17 is cited). Christ bore witness of Himself with the Father (John 8:18 is cited) and the Holy Spirit also bore witness of Christ (John 15:26 is cited). So we can see that according to our commentator the witness of the Trinity is to Christ. Finally he interprets the closing clause of verse 8, et tres unum sunt as referring to the oneness of nature and power of the Trinity.

A fascinating glimpse into early Irish exegesis!
Posted by Shane Angland at 8:18 PM