Eriugena's View of the Eucharist 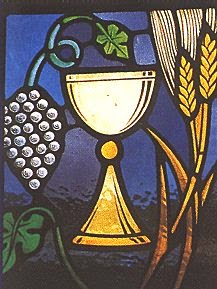 Eriugena's (c. 815 – c. 877) view of the Eucharist was an outworking of his view of creation and the physical world as “theophonies through which and in which God has appeared and appears and will appear.” (Com. in John 302A). Jesus Christ is revealed to the faithful, according to Eriugena, through the Scriptures which testify of him, and also the created world, which manifests visible the invisible attributes and character of God (PP 723D).


In other words, God manifests himself through visible, corporeal, and intelligible means, e.g. Scripture and creation. Any such self-manifestation by God is referred to by Eriugena as a theophany.


Eriugena defined theophanies as “certain divine apparitions comprehensible to the intellectual nature [of people]” (PP 446C), or “the forms of visible and invisible things, through whose order and beauty God’s existence is made known” (PP 919C).


The Carolingian world that Eriugena lived and taught in stressed a real presence and substantial change in the offering of the Eucharist. This can be seen in the Gallican liturgy used at this time. However, Eriugena seems to have purposely avoided these terms, and instead regarded the real presence of Christ in the Eucharist not in terms of substance but theophany. The Eucharist was the "spiritual food" of God's people (cf. 1 Cor. 10:3), but like all theophanies, it pointed beyond itself as a spiritual sign or marker, back to God.


Walker noted that in Eriugena's theological framework, sacraments are not final but significant pointers in the cosmic process. Eriugena states that the sacrament of the Eucharist is “a typical similitude of spiritual participation in Jesus whom we taste by faith in the understanding alone…and receive into the heart of our inner being for our salvation and spiritual growth and ineffable deification.” (Expos. Super Hierarchy Celestial 140B).


Hincmar archbishop of Reims (d. 882) regarded Eriugena's conception of the Eucharist as heretical because in Hincmar's words, Eriugena did not regard the Eucharist as truly the body and blood of the Lord but only a memorial (non verum corpus et verus sanguis sit Dominis, sed tantum memoria).


Eriugena's theology held that the universe in all its parts had a sacramental quality. “For in my opinion," he wrote, "there is nothing among visible and corporeal things which does not signify something incorporeal and intelligible.” (PP 866A). To speak of a real presence in the Eucharist (i.e. a change of substance from bread to flesh) was to miss the point of the role of the sacrament, which is to point beyond itself to a spiritual reality. The Eucharist was received by faith, and consumed by faith, because by faith the Christian is united to Christ through divine grace (mente non dente, Com. in John 311B).
Posted by Shane Angland at 12:48 PM