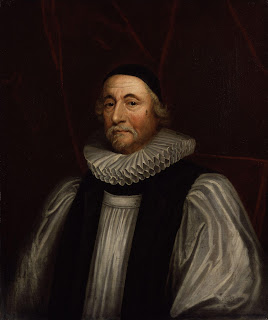 James Ussher, Church of Ireland Primate of All Ireland between 1625–1656, was an antiquarian, philologist (he obtained the first copy of the Samaritan Pentateuch in the west), textual critic (the first English speaking scholar to critically review the LXX), Biblical scholar (his Doctoral thesis was on Daniel’s ‘seventy weeks prophecy’), and poet (during his teen years at least, he later gave up poetry as a waste of time).
Speaking of time, he retro-calculated the creation of the world to Saturday, October 22nd, 4004 BC. The precise time for creation, however, he vaguely described as ‘the start of the evening’. Not nearly precise enough for some. There are many things I admire about James Ussher and some things that I do not.

A good series of advice he gave to up and coming preachers was,

1. Read the Bible. A careful and precise knowledge of the Bible (in the original languages) is the best tool for preaching
2. Don’t repeat the views of others without measuring them against Scripture and fact
3. Avoid pointless controversies
4. Use a vocabulary that is easy to understand (avoid ‘exotic’ phrases!). It is easier to make something easy hard to understand than to make something hard easy to understand.
5. Be sincerely moved and broken by the message you preach
6. Study hard. Avoid ‘indecent or ridiculous expressions’ to fill the gaps of poor study
7. Don’t water down the truth or give consent to sin
8. Teach by example
9. Don’t be puffed up by men’s praise, nor dejected by their scoffs or frowns.

Among other words of wisdom, Ussher exhorted Christians not to go around with sad and dejected faces. “By your dejection you bring an evil report upon religion”, he once remarked. “Sincere Christians may and ought to rejoice, and to show themselves cheerful; whereas the vicious and wicked have the greatest reason to be sad!”

He also challenged preachers to verify any quotations they might use from the Church Fathers or historical sources. “Trust no man’s eyes but your own”. Ussher frequently debated Roman Catholics and the Church Fathers were used and abused by both sides. Ussher believed careful historical method was a godly characteristic.

Ussher was a man with a passion for the Bible, history and textual criticism. Yet he was also a man of his times. His opposition to Roman Catholicism was vitriolic at times and his politics may have impeded his love for the Catholic Irish. This was an error of judgement and greatly hindered the reformation in Ireland. He urged the government to force Irish Catholics to attend Protestant Church services (hardly biblical). A godly man though he was, he was not without sin or prejudice. His dying words were, “O Lord forgive me, especially my sins of omission!”
Posted by Anglandicus at 4:27 PM