Ishtar Gate - The Gate to Babylon 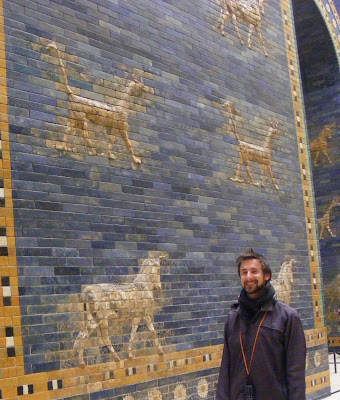 Katie and I recently had the pleasure of visiting Berlin where the Ishtar gate now resides. The Ishtar gate dates back to the reign of Nebuchadnezzar II. This is the famous king of the book of Daniel, though he also mentioned in Jeremiah, II Kings, II Chronicles, Ezra, Nehemiah, Esther and Ezekiel (the deuterocanonical book of Judith also mentions him).

The structure is of blue glazed bricks and stood at the end of the Processional Way in the ancient city of Babylon. The walls on either side of this corridor were decorated with over a hundred lions. Religious processions involving the parading of the statue of Ishtar, the goddess of love and war, would parade down this street. 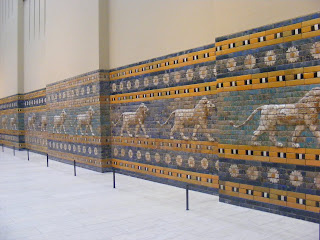 The possession of the gods image was a fundamental tenant to Babylonian religion. The Babylonians would ‘kidnap’ the gods of their enemies and hold them captive in Babylon, thus asserting their control over their enemies. The Elamites once captured Babylon and took the statue of Marduk back to Susa in the 12th century BC. The Babylonians couldn’t conduct their New Year celebrations without the statue and it was forbidden to make a replica since the statue itself was ‘alive’. Nebuchadnezzar I (d. 1104 BC, not to be confused with Nebuchadnezzar II) raised an army to retrieve the statue. For this action he was given the epithet the ‘pious prince’. The assurance that their gods would bless and protect Babylon was dependent on the Babylonians ability to protect their gods. How different was the God of the Hebrews. 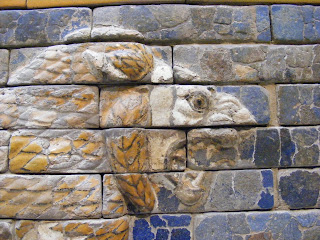 We can maybe see why Nebuchadnezzar took with him to Babylon the articles of Solomon's Temple (Dan 1.2). Since the Jews had no statue of Yahweh, the closest thing to removing their God from them, from a Babylonian point of view, was to take the Temple treasures back to Babylon. The Jewish prophets, however, understood that nothing could conquer Yahweh, and no king could claim to control him. Nebuchadnezzar and the Babylonians were merely the instruments that He was using to discipline his children. Indeed, as three Hebrew exiles were to testify, ‘our God whom we serve is able to deliver us.’ Kingship and power were not by virtue of possession of holy relics, but by the will of Yahweh. Protection could not be gained by holding onto an idol, but by trusting the Holy One of Israel.

Blessed be the name of God forever and ever, to whom belong wisdom and might. He changes times and seasons; he removes kings and sets up kings; he gives wisdom to the wise and knowledge to those who have understanding; he reveals deep and hidden things; he knows what is in the darkness, and the light dwells with him. Daniel 2.20-22
Posted by Anglandicus at 11:02 AM