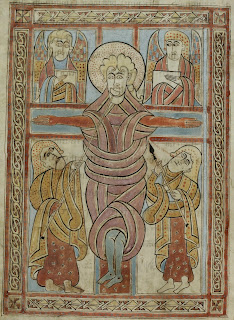 "And they all condemned him as deserving death" Mk 14.64
A manuscript in Turin preserves an early commentary on Mark’s Gospel written by an Irish theologian  (s. Cummean c.610). In Mark 14:64 where Jesus is condemned to death by the Sanhedrin the commentary reads.
So that with his cross He might cancel our own crucifixion, and by his death He might destroy our death. With the form of a serpent He slays the serpent, because by the serpent made of wood the other serpents are swallowed up. Whence He said through the prophet: ‘I will be your death, O death, and your destruction, O Hell’ (Hosea 13.14 Vul.). His reproach has removed our disgrace. His bonds have set us free. By the crown of thorns on His head we have gained the diadem of the kingdom. With His wounds we are healed. By his burial we are resurrected. By His descent into Hell we rise to heaven. Foreseeing all this, the prophet said, “What shall I render unto the Lord for all his benefits toward me?” (Psalm 116.12).
Posted by Anglandicus at 12:35 PM