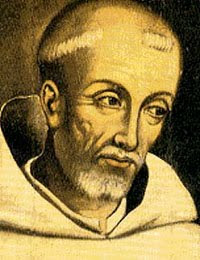 St. Bernard of Clairvaux was one of the most influential theological forces of the medieval period, his influence on monasticism led to the Cistercian order. The famous abbey at Clairvaux, where Bernard was Abbot, produced several distinguished leaders of the western church, including a Pope. Visitors to Clairvaux were frequent, including a man who came from ‘the uttermost parts of the earth’, namely the Irish bishop Malachy who struck up an abiding friendship with Bernard.

Among Bernard’s many works of Biblical commentary are several sermons on the Song of Songs. In the following excerpt Bernard contemplates the nature of God’s grace in the heart of the believer.

A little later the Bride uses the same words again, unless I am mistaken, but not in the same order. With exquisite subtlety, she follows the order of the Prophet and says: `I am my Beloved's and he is mine.' Why this? Surely that she may show herself more full of grace when she surrenders wholly to grace, attributing to him both the beginning and the ending. How indeed could she be full of grace if there were any part of her which did not itself spring from grace? There is no way for grace to enter, if merit has taken residence in the soul. A full acknowledgment of grace then is a sign of the fullness of grace. Indeed if the soul possesses anything of its own, to that extent grace must give place to it; whatever you impute to merit you steal from grace. I want nothing to do with the sort of merit which excludes grace. I shrink from whatever I possess, that I may truly possess myself, unless that which makes me my own is to some extent my own. Grace restores me to myself, freely justified, and thus sets me free from the bondage of sin. For where the Spirit is, there is liberty.

Posted by Anglandicus at 6:47 PM