In the book of Judges chapter eighteen verse thirty an idolatrous Levite who participated in idol worship is named as Jonathan the son of Gershom, son of Moses. The NJKV and NASB read ‘son of Manasseh’ here instead of ‘son of Moses’ (ESV, NIV). Which is it? This is the interesting case of ‘the suspended nun’. The nun in question is not a woman who is part of a religious order but the fourteenth letter of the Hebrew alphabet.

The base text used in the OT for the NKJV, NASB, ESV and NIV is the same, namely the Masoretic Text as preserved in Codex Leningradensis B19a. So why do some versions read Manasseh and some Moses? The reason is that the name Manasseh is written in Hebrew as (מְנַשֶּׁה) and Moses is written as (מֹשֶׁה), the only difference in the consonantal text being the letter nun. In the Leningrad manuscript the name in question is written as Moses (מֹשֶׁה) but with the letter nun suspended between the mem and the shin letters. Several Masoretic manuscripts have this peculiar orthography as can be seen in this picture from the Aleppo Codex (which is even older than the Leningrad manuscript). Thus Moses can be re-read as Manasseh using the suspended nun. 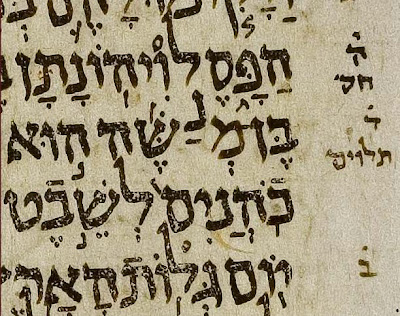 If one looks to the Septuagint (LXX) we also get a diversity of scribal opinion. For example Codex Alexandrinus reads Moses (Μωυσῆς) and Codex Vaticanus reads Manasseh (Μανασση), so clearly both variant readings were in existence prior to the later medieval Masoretic Text. Incidentally, the Vulgate reads Moses (Mosi) here.

The reason for the suspension of the nun is explained in the Talmud, (Baba Bathra f. 109b) observes: “Was he a son of Gershom, or was he not rather a son of Moses? As it is written, the sons of Moses were Gershom and Eliezer, but because he did the deeds of Manasseh, the Scripture assigns him to the family of Manasseh.”

The shame that a grandson of Moses could be an apostate was hard to read and so the scribes added the consonant nun to theologically show that Jonathan was spiritually the son of the chief apostate in the OT, the wicked Manasseh. Such euphemistic interaction with the text was characteristic of Jewish scribes. The suspension of the nun allows the text to be read without bringing reproach on Moses, yet at the same time preserving the name Moses in the text. That it originally read Moses is clear, as is the high regard the Jewish scribes held Moses.
Posted by Anglandicus at 5:24 PM