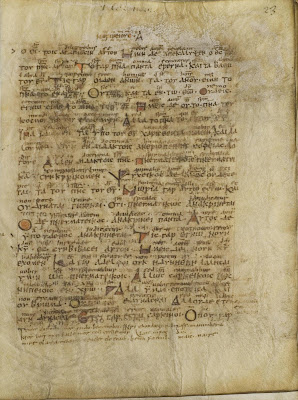 Codex Boernerianus is a ninth century Greek-Latin diglot manuscript of the Pauline Epistles. The Latin translation is written above the Greek text and follows it word for word. It was probably produced in modern day Switzerland by Irish monks. It’s so strange to think of some lads from the west of Ireland fluent in Latin and Greek, producing Biblical manuscripts somewhere in central Europe over a thousand years ago!

At the foot of folio 23(r) there is an Irish poem about a pilgrimage to Rome.

To come to Rome, to come to Rome,
Much of trouble, little of profit,
The thing you seek for here,
If you don't bring it with you,
you won't find it.

One gets the impression that the Irish scribe’s trip to Rome wasn’t all he had hoped it would be. I visited the Eternal City with Katie in March. Had a great time! Irish scribes were notorious for defacing Biblical manuscripts with poems or notes to the scribe sitting next to them.

Metzger mentions a ninth century Latin manuscript of Cassiodorus’ commentary on the Psalms which has several Irish notes written in the margins. Such as, ‘tis cold today!’, ‘no kidding; it is winter!’ ‘this lamp gives a bad light’, ‘this vellum is certainly thick!’ ‘huh?, I would say it’s thin!’ ‘I feel quite dull today, don’t know what’s wrong with me.’

Metzger wondered, “How did it happen that the head of the scriptorium allowed his monks to disfigure a manuscript with such trivialities? One may perhaps conjecture that the manuscript was written in a continental monastery, where the authorities knew no Irish and therefore the scribes from Ireland felt they could play pranks with impunity. When asked what he had written, the scribe might point to some pious sentences in Latin in the top margins of preceding pages and say, ‘merely Irish equivalents of sentences like these!’"

Sure we’ve all used the cúpla focail to our advantage when abroad at one time or another!
Posted by Anglandicus at 5:44 PM