What the Dead Sea Scrolls teach us - Part 1 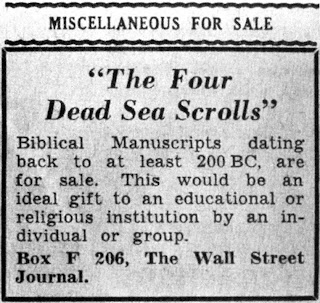 This advert appeared in the Wall Street Journal on July 1, 1954. Among the scrolls for sale from Qumran was the famous Isaiah scroll, a complete copy of the book of Isaiah (with minor lacunae) from c. 120BC. The Israeli government succeeded in purchasing the scroll and it now resides in the Shrine of the Book Museum in Jerusalem, well worth a visit if you’re ever in Jerusalem. The Dead Sea Scrolls (DSS) have shed invaluable light on the textual transmission of the Hebrew Bible.

One curious lesson drawn from the DSS, however, was mentioned in a Soviet Newspaper
Комсомoльская прaвда, (Komsomolskaya Pravda), Комсомoльская is an abbreviation for the Union of Communist Youth, and прaвда means the Truth). It concluded, in a 1958 article, that the primary lesson to be drawn from the DSS was that it conclusively proved that Jesus never existed! Fortunately, as F. F. Bruce noted in his book ‘Second Thoughts on the DSS’, “more objective Qumran studies than this one have been published in Russia.”

There are certainly many lessons we can learn from the DSS and I hope to mention a few of them over the next few days, this one, however, is probably not one of them.
Posted by Anglandicus at 9:50 AM