What the Dead Sea Scrolls teach us - Part 3 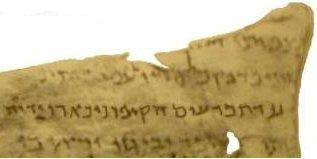 In the 1960s a fragment from a first century scroll of the Psalms was discovered in a Zealot hideout at Nahal Hever in the Judean wilderness. The scroll fragment was found along with letters from Zealot leader Simon bar Kochba. Tov notes that scrolls from Nahal Hever, because of their association to the Zealots, were probably representative of 'main-stream' Jewish scribal texts. Interestingly this fragment preserves the text from Psalm 22:16(17). This scroll is of great interest to textual critics as the majority of Masoretic manuscripts read differently to the text normally followed by English translations of Psalm 22.

Most English Bibles read at verse 16(17 in the Hebrew), “They have pierced my hands and my feet”. While the Masoretic text in the Hebrew Bible reads, “like a lion [are] my hands and my feet”. The difference between ‘like a lion’ (כארי) and ‘they have pierced (כארו) is quite tiny visually. The reading, “they have pierced”, is attested in several medieval Hebrew Masoretic manuscripts. BHS lists כארו as supported by pauci manuscripti (i.e. a few, Kenicott gives seven), it also lists כרו (also pierce) as supported by two manuscripts, (Kenicott adds that it is also found in the margin of three other manuscripts). Thus the variant ‘pierced’ was attested (though slimly) in later Masoretic manuscripts. Textual criticism does not follow democratic principles, according to Tov, so a minority reading should not be ruled out straight away. Furthermore the Septuagint reads ὤρυξαν (pierced) as did the ancient Syriac and Vulgate translations. The vorlage for the Syriac and Vulgate was the proto-Masoretic Text; thereby we have indirect evidence for the variant reading via translation.

Midrash commentary for כארי in Psalm 22 mark ‘like a lion’ as a verb, and the Masoretic notes for verse 17 (in Heb) note that this word כארי occurs also in Isaiah 38.13, but it informs the reader that the two occurrences are not identical. Thus there was an early tradition that כארי in Psalm 22 meant something different to the occurrence in Isaiah.

Finally to the scroll from Nahal Hever! I quote here from The DSS Bible, translated with commentary by M. Abegg and P. Flint (Directors of the DSS Institute) and E. Ulrich (professor of Hebrew at Notre Dame University and one of the chief editors of the Qumran Biblical texts).
“Psalm 22 is a favourite among Christians since it is often linked to the NT with the suffering and death of Jesus. A well known and controversial reading is found in verse 16, where the Masoretic Text reads, ‘Like a lion are my hands and feet,’ whereas the Septuagint has ‘They have pierced my hands and my feet.’ Among the scrolls the reading in question is found only in the Psalms scroll found at Nahal Hever (abbreviated as 5/6HevPs), which reads ‘They have pierced my hands and feet’!” 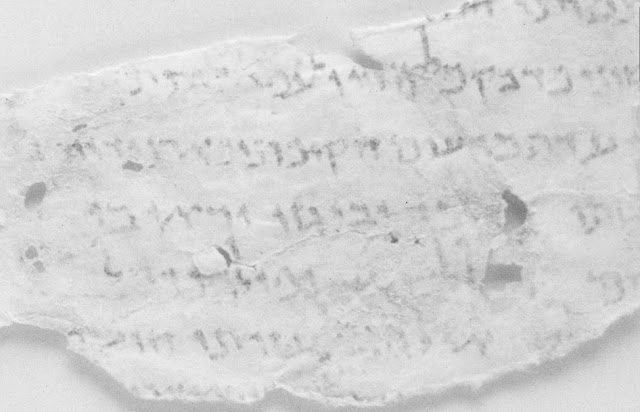 Posted by Anglandicus at 2:45 PM