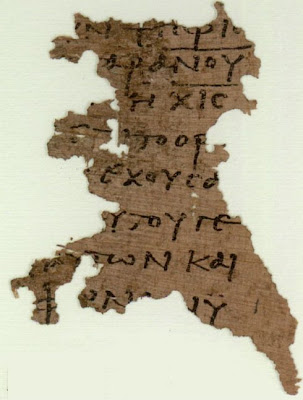 Many of us are familiar with ‘the mark of the Beast’ as being '666'. The majority of NT manuscripts (mss) give the ‘number of the Beast’ in Revelation 13:18 as 'six hundred and sixty six'. I used to read '666' as 'six, six, six', but this is actually incorrect, as the number '666' is abbreviated with three Greek characters for six hundred χ, sixty ξ, and six ς, thus χξς, not six, six, six ςςς.

Interestingly, there is a minor textual variant at this point, some manuscripts give the number not as '666' but as '616', others as '665'. These two variant readings (v.r.) aren’t serious contenders, UBS4 gives the '666' reading as category {A}, i.e. they are certain it represents the original. Here’s why.

'666' is found in P47 (part of the Chester Beatty collection in Dublin), Codices Sinaiticus and Alexandrinus (in the British Library), plus all uncials of Revelation and other important witnesses, including the Byzantine/Majority Text . This shows '666' as having early, wide, and strong support. It is also found in the Old Latin version (in Codex Gigas, probably the biggest codex in the world!) and the Vulgate. Plus the Syriac, Coptic, Armenian, and Ethiopic versions. Thus it has widespread versional support. Early Church Fathers like Irenaeus, Hippolytus, Andrew and others quote the passage as '666'. Irenaeus (II cent.) states that Christians who knew John quoted the passage as '666', he also states that the good and ancient copies of Revelation read '666' (Book V, Chapter XXX. Adversus Haereses). Irenaeus made these comments as he was aware of manuscripts which read not '666' but '616'.

Thus both textual variants are actually a play on Nero’s name! Applying numerical values to people’s names is known as gematria.

Finally, there is another variant, '665'. This appears only in one manuscript from the eleventh century (ms 2344). It is thought that perhaps this scribe was trying to apply gematria to a mis-transliteration of Nero’s name from Hebrew. Misspelling it קסר נרה, which would have the value '665'.

So there we have it. The textual evidence strongly supports the 'number of the Beast' as six hundred and sixty six, χξς.
Posted by Anglandicus at 12:56 PM