What the Dead Sea Scrolls teach us - part 2 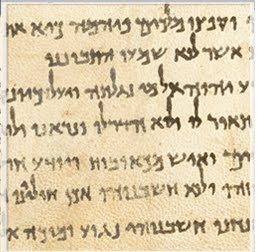 The majority of what we now call the DSS came from a religious community at Qumran. Several other important scrolls and fragments were discovered at other locations in the Judean desert, such as Masada and Nahal Hever. The DSS at Qumran date from the third century BC to roughly AD 70. Thus they allow us to view the Biblical text as it stood in the Second Temple period. The scrolls at Qumran fall into four families of texts. Broadly speaking there is the proto-Masoretic text, Septuagint aligned, proto-Samaritan and non-aligned.
The majority of the scrolls at Qumran reflected the proto-Masoretic text (MT), which is extremely close to the modern Masoretic Text which is the basis for most English Old Testaments. The texts found outside of Qumran in the Judean Desert almost entirely reflect the proto-MT. As Emmanuel Tov points out, “When one compares early Qumran Masoretic manuscripts with [codex] L (AD 1009) one realizes how close they are to medieval sources. The combined evidence shows that the consonantal framework of the MT changed very little, if at all, in the course of more than one thousand years. Even more striking is the fact that the texts from the other sites in the Judean desert are virtually identical with the medieval texts.”
Qumran was a breakaway group from mainstream Judaism. Several of their scrolls reflect poor scribal habits. The Qumran community was a far cry from the professional sopherim in the Temple and thus not necessarily a reflection of the best or most accurate textual witnesses. Yet, with that said, even the scrolls from Qumran testify to the stability of the proto-MT. Scrolls from outside Qumran, especially those associated with the Zealots reflect even better texts. This is not surprising since the Zealots were supported in their uprising in AD 132 by the Rabbis and religious leaders. The Temple circles, with access to the Temple scrolls, are seen to be preservers of the MT. The plurality of textual streams from Qumran is testimony to popular editions, and non-professional copies.
Next we will examine a fragment from Nahal Hever of Psalm 22. Psalm 22.16(17) in the modern Hebrew Bible doesn't read 'they pierced my hands and my feet', instead it reads 'like a lion my hands and my feet', it will be interesting to see how this Psalm read in the first century.
Posted by Anglandicus at 1:53 PM