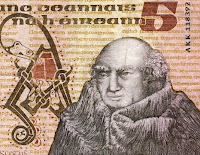 John Scotus Eriugena was an Irish scholar and theologian from the ninth century. His name literally means John the Irish, from Ireland. His intellect and wit were legendary. He once graced the old Irish five pound note. His theological influences included Augustine, and many of the fathers from the Eastern Orthodox tradition, such as Maximus the Confessor and the Cappadocian Fathers. He was literate in Greek as well as Latin.

His Homily on the Gospel of John is a beautiful piece of speculative theology. I include an excerpt here, “...The two Apostle’s run to the tomb. The tomb of Christ is holy scripture in which the mysteries of his divinity and humanity rest on the solidity of letters as if supported by stone. John however ran ahead of Peter. For the power of contemplation, wholly purified, penetrates more keenly and swiftly the profound secrets of divine letters than does action, which still stands in need of purification. But it is Peter who is first to enter the tomb, followed by John, Thus both of them run there and both enter in. Peter is the figure of faith, while John symbolizes understanding. And since it is written ‘unless you believe, you will not understand’ (cf. Isa 7.9 LXX), faith is necessarily the first to enter the tomb of holy scripture, followed by the understanding, whose path is prepared by faith. Peter recognised Christ, who had been made both God and man in time, and cried out; ‘You are the Christ, the Son of the Living God’ (Mt 16.16). He did indeed fly high, but higher still flew the one who, when he had grasped Christ with his understanding as God from God, born from before all time, said ‘In the beginning was the Word’ (Jn 1.1). And so Peter, which is to say the actions of virtues, perceives how the Son of God is enfolded in flesh in a wonderful and ineffable manner, by the power of faith and action, while John, who is the highest contemplation of truth, wonders at the Word of God as it is in itself, prior to the flesh, absolute and infinite in its own origination, which is to say in the Father. Peter is truly led by divine revelation when he sees the eternal and the temporal uniting in Christ, but it is John who leads the faithful souls to knowledge of what in Christ is purely eternal.”

Too bad that he was stabbed to death by his own pupils because he forced them to think!
Posted by Anglandicus at 4:32 PM